In today’s video, I respond to a viewer who tells me “I can’t stop thinking about my wife’s exes, and her choices in the past.”

Read or watch below to know my response to a viewer who tells me “I can’t stop thinking about my wife’s exes.”

Zachary Stockill: “I can’t stop thinking about my wife’s exes… Why oh, why did my wife sleep with some idiot?” If you’re struggling with retroactive jealousy around your partner’s past sex life, chances are very good that you’ve asked yourself this question at least once. In today’s video, I’m going to respond to a viewer who’s struggling with the fact that his wife made some choices in the past that, he thinks, weren’t exactly great.

Okay, I have a note from a viewer on this channel, we’ll call S.

I’m struggling with intrusive thoughts, and can’t stop thinking about my wife’s exes… The type of man my wife chose to date before she met me is not what I’d imagined her to like… These guys are way below her standards. And she tells me the same thing. So I often wonder, why did she choose them? And why did she choose me? If I’m not like them at all?

Okay, yes. So there are two questions here. Why did your wife make certain choices in her past? And why did she choose you? If you’re so different from a lot of her exes?

So “I can’t stop thinking about my wife’s exes…why did she sleep with some idiot?” Let’s just call it for what it is. It sounds like your wife made some choices in her past that you don’t exactly love.

People sleep with other people for all kinds of different reasons.

The point is people have sex for all kinds of different reasons. And more importantly, people often have sex for different reasons depending on the season or the phase of life that they’re in. I can speak personally: as a man in my mid-30s, I’m making different choices in my relationship and dating life today than I did 10 years ago. I probably don’t have to outline it. Let’s say 10 years ago, my standards were a little lower than they are today. And that isn’t to say anything bad about anyone I’ve been with in the past…

What you want in a partner or in a sex partner, a sexual partner, can change depending on the phase of life that you’re in.

Don’t judge your wife’s past choices based on the woman she is today.

Depending on how long ago she made these choices, she could be a very, very, very different woman than she was 5, 10, or certainly 20 years ago. And think about yourself. Have your standards, and have your choices, always been the same throughout your entire dating/sexual life? Probably not. I don’t think that describes most people. It can be useful to reflect back on your own past and your own choices in dating, sex, and relationships.

The second question is a little more interesting, at least to me. “I can’t stop thinking about my wife’s exes… So why did she choose me if I am so different from people that she was with in the past?” So keeping in mind, I don’t know you, I don’t know your wife. I don’t know the situation. This is not a coaching relationship. I’m just a guy on YouTube, and you’re just a commenter on YouTube. We don’t know each other. That said…

Some people hit a certain age, and they say “you know what, I want to settle down,” and they try to choose someone who’s a “safe bet.”

Someone who is very different from their past lovers. I’m not saying it’s a good or a bad thing. But that is a fact. Some people choose people based on this. However, the good news is, I don’t think that’s most people.

There are certain narratives around the internet and the “red pill” community, in the “manosphere,” and other spheres of the internet that say that “all women want to have fun with the alphas and settle with the betas…” Sure, there are some women like that. I don’t think that’s most women. I don’t think that’s most people. I think most people are making better and better and better choices in their relationships. And I really don’t think most people “settle” with someone they aren’t truly attracted to.

And again, if you’re feeling like “I can’t stop thinking about my wife’s exes” and wondering why your wife chose you, as opposed to some of the people she was involved with in the past, one’s tastes can change. As you get older in life, as you gain more perspective and experience, and you’ve been through some bad experiences, you’ve been through some good experiences… Hopefully, you’re making better choices as you go through life. Hopefully, you learn some painful lessons about what constitutes a good partner, what constitutes a train wreck of a partner, and all the rest.

So I wouldn’t look at it as necessarily a terrible thing, if your wife is telling you that, you’re different from her exes. It could be a good thing. That’s probably the reason she married you.

But above all, trust her actions over her words. In other words,

If you feel like “I can’t stop thinking about my wife’s exes,” I would ask: Is she loyal to you? Does she give you all kinds of affection? Do you still have a great sex life?

Does she pledge her loyalty and devotion to you? Do you guys have a great relationship? And you have all kinds of fun together? And she seems genuinely happy? All these things.

Does it seem like she has genuine desire for you most of the time? And if the answer is “yes” to all those questions, I really don’t think you have much to worry about. Because again, people make different choices depending on the season of life that they’re in.

On the other hand, if your wife has not demonstrated desire for you, if she doesn’t give you affection, if it seems like you’re getting the real sense that she’s settling for you, that’s another story entirely. That probably does mean that there are serious problems in your relationship that you need to address.

However, I’ll just say one more time that I think that is the minority of cases like this. I think most people are making better and better choices as they move through life, as they move through relationships. That’s what I’m doing. I would imagine your wife is probably the same. Thanks for your question.

If you or others need more help working through retroactive jealousy, then you can check out my flagship online course “Get Over Your Partner’s Past Fast”.

How To Get ANYTHING You Want (Really) [VIDEO]

How To Get ANYTHING You Want (Really) [VIDEO]

How to Let Go of Your Partner’s Past: The Truth [VIDEO]

How to Let Go of Your Partner’s Past: The Truth [VIDEO]

Jealous Men: STOP Making This Mistake in Your Relationship [VIDEO]

Jealous Men: STOP Making This Mistake in Your Relationship [VIDEO] 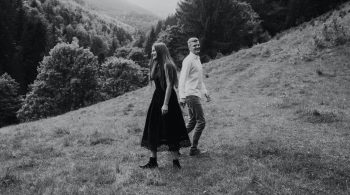