In today’s Q & A video I respond to Joshua, who is worried his girlfriend lied about her past. Joshua writes:

How do I deal with the fact that my girlfriend lied about her past when I asked her?

Zachary Stockill: Okay, Joshua. Unfortunately, this is a fairly common scenario for a retroactive jealousy sufferer.

Maybe they will ask their partner many questions about their girlfriend’s past, their girlfriend will lie to them or maybe omit some details, they find out about it months later after more questioning, or whatever, and this leads to a complicated situation where your girlfriend has basically lied to you about something about their past.

So the first question I would have for you, Joshua, is:

Is this representative of a broader pattern?

In other words, is your partner a liar, in essence? Are they lying all the time? Have they lied to you about many things throughout your relationship?

For example, for me, lying is just not acceptable, period, full stop, end of story.

Now, of course, sometimes, there’s some scenario where there’s a little white lie or a little innocent lie and it’s not a huge deal and I find out about it later and maybe it’s annoying or disappointing, and we talk about it, and we confront it, and it’s over with.

But for example, I could never date someone who’s just lying all the time.

And it’s very important that you don’t take ownership of their growth from them, because it’s disempowering for them. It’s often insulting and patronizing for them when you try to do that.

And also, you can’t force other people to change. They have to want to change first.

Is the thing they lied about a deal-breaker for you?

For example, did they lie about having a kid, having a child in the past?

Or did they lie about being divorced before?

But for example, if I was with someone for a while and they lied about something that was very important, that was a really important issue to me that I feel like I have the right to know about, and I only find out about it months later after they lied to me, that might be a deal-breaker for me.

In fact, it probably would be.

Because I’m very honest about my past. If people have questions, I’ll be honest about it. And I expect the same from the person I’m dating.

So spend some time and think about this. Did they lie about a deal breaker issue?

My third question is:

If they didn’t lie about a deal-breaker issue for you, why do you think they lied?

And do you accept that?

In other words, quite frequently, I’ll get emails very similar to what you wrote to me, where a retroactive jealousy sufferer will find out that their girlfriend lied about her past, or sometimes it’s a coaching client, or whatever.

And we’ll have a call and I’ll ask some questions about this, and it eventually comes out that it actually makes a lot of sense why they lied, and the thing they lied about is actually pretty small and insignificant, not really important.

Maybe they lied about this person they once slept with 3 or 4 or 5 or 10 years ago, or whatever. Or this little crush that they had on this guy at work, or whatever.

I don’t know about your situation, but for many retroactive jealousy sufferers, the thing their partner lied about is pretty insubstantial in the grand scheme of things, not a huge deal.

And frankly, the fact that their girlfriend lied about her past doesn’t always indicate that their partner is this terrible liar and they can’t be trusted.

It indicates that their partner just wanted some peace and they didn’t want to have a fight about this incident from years ago, or they didn’t think it was important, and why hurt you by telling you something that really doesn’t make a lot of difference if you know or not, and it’s probably only going to hurt you.

So, again, your values are your values, and you should live true to that.

But for me, that’s the way I see a lot of these emails that I get, where their partner may have lied about something, but it isn’t a huge deal. It isn’t a deal-breaker issue.

And thus some forgiveness, some understanding might come in handy in the situation. Because living with a retroactive jealousy sufferer is really not easy.

I think back to the pain that I once caused someone very important to me, and I still cringe. If you struggle with retroactive jealousy and you haven’t really overcome it yet, it can be very tough to live with you.

Click here to learn more about my online course for overcoming retroactive jealousy, “Get Over Your Partner’s Past Fast.”

“Can My Partner Help Cure Retroactive Jealousy?” Q & A [VIDEO] 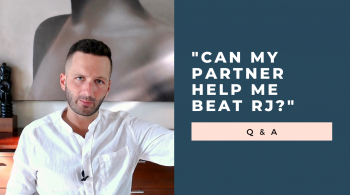 “Can My Partner Help Cure Retroactive Jealousy?” Q & A [VIDEO]

“Partner Wants to Talk About their Past (I Don’t Want to Hear It!)” [VIDEO] 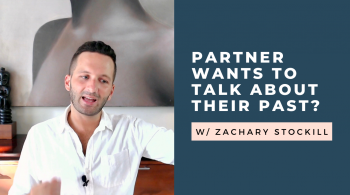 “Partner Wants to Talk About their Past (I Don’t Want to Hear It!)” [VIDEO]

Meditation for Overcoming Jealousy: Why it Works [VIDEO] 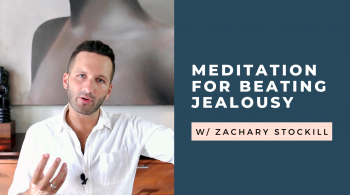 Meditation for Overcoming Jealousy: Why it Works [VIDEO] 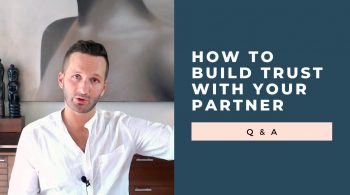