In today’s video, I share my number one tip for any man who is interested in “vetting” for a potential girlfriend or wife.

Read or watch below to learn more about how to vet a potential girlfriend.

Zachary Stockill: So you’ve met some incredible woman who you can’t seem to get enough of. She laughs at your dumb jokes. You guys have a great time when you go out together. She’s absolutely beautiful. You’re totally smitten. And you’re starting to wonder: could this be a potential future girlfriend or even a potential wife?

The question of how to vet a potential girlfriend or wife is highly subjective.

But I get a lot of questions about this from retroactive jealousy sufferers and just men, in general, wondering about how to make better choices when it comes to who to invite into their life on a long-term basis. How to vet a potential girlfriend?

So in today’s video, I share my number one tip for any man interested in how to vet a potential girlfriend or wife.

But anyway, I think over my dating life, to be frank, I’ve been pretty successful when it comes to the women who I’ve chosen to invite into my life on a long-term basis. As far as I know, I’ve never been cheated on. There haven’t been any train wreck breakups, and all kinds of chaos and drama. I’m very friendly with, I think, all of my exes when I sit down and think about it.

I’m proud of the decisions that I’ve made when it comes to who I’ve invited into my life on a long-term basis. And I think I’ve learned a few things along the way.

My number one piece of advice for any man who’s interested in how to vet a potential girlfriend or wife is to look for patterns, not perfection.

When it comes to how to vet a potential girlfriend, I think a lot of guys approach this issue wrong. I think a lot of guys approached this issue with the wrong attitude and with an unnecessarily skeptical, suspicious vibe that they bring into their dating life. They’re looking for perfection. They’re kind of waiting for that woman to slip up and show her true hand. Or, on the other hand, they’re not looking for anything at all.

Basically, they’re ignoring the parade of red flags behind this beautiful woman. That said, a lot of guys do go looking for perfection. And, anytime there’s one little slip-up their whole vision and image of their girlfriend kind of falls to pieces. This is very, very common with this issue that we deal with on this channel so frequently with retroactive jealousy.

So many men tend to idealize their girlfriends or idealize their wives and hold them up as these kinds of goddesses who could do no wrong and who never wanted to have any casual sex. But this has disastrous consequences for everyone involved.

Because when you put someone on a pedestal, they have no choice but to look down on you.

It’s bad for attraction, and bad for your sex life. It’s bad for your psyche to go around thinking that anyone is perfect. That said, there could be glaring red flags in someone’s either present behavior or in their past that you should absolutely look out for when you’re in the process of dating.

And I don’t think anyone should settle. I hate the word settling. Because to me, it implies settling for less than you deserve. Which is never a good recipe for a successful long-term relationship.

So what’s the solution? You shouldn’t look for perfection, but at the same time, you should be looking for patterns. I often tell coaching clients that an event can be an exception, but a pattern is a person.

If you want to know who someone truly is, watch what they’ve done, not what they’ve said, over extended periods of time.

And obviously, the longer you’ve known this person, or the more you know about their extensive track record, the more time you have to judge them on who they truly are. And the longer a time horizon you look at, the more insight you’ll have into their true nature, their true behavior, their true character. That’s why I talk about looking for patterns rather than perfection.

Because you can look at something that your date maybe did or said, you know, one night, three years ago or something when she was half drunk. Or you can look at the majority of her 20s. You can consider who she’s been over the past, say, 10 years. What will tell you more about a person? One event from their life that maybe they’re not proud of, or an entire decade of their life, which has been mostly consistent? Look for patterns over perfection.

Look who she’s been over the past five years, over the past 10 years. Look at her consistent behavior over long periods of time, as well as more recently. Those patterns will give you the most insight into her true nature, into her true character. And above all, don’t fall into the trap of looking for perfection because as I cover endlessly on this channel:

And you will drive yourself and others absolutely crazy if you go looking for perfection.

And, when I talk about looking for patterns, of course, sometimes you can get a lot of insight about someone by having long conversations about their past. As long as you aren’t falling into the irrational retroactive jealousy, well of just endless questions and pestering her about her past. That’s a different issue…

What I’m saying is, let’s say you’ve got a handle on your retroactive jealousy. And, you just want to get to know them. Of course, grounded calm, rational conversations about the past can be enlightening.

However, I think looking at their behavior in the present with you over extended periods of time is the best recipe for success when you’re thinking about committing to someone long-term. And when I say long term, I mean long term.

Now, of course, getting a monogamous girlfriend and entering a long-term relationship, you can make that decision relatively quickly. But even then, I would at least give it a few months. But if you’re thinking of committing to someone in marriage, or proposing to someone, I think just as a general rule of thumb:

You need, at the bare minimum, one year to really figure them out; to know where they’re coming from, to know who they are.

And if you’re a retroactive jealousy sufferer, and you have serious questions about maybe the incidents from your partner’s past, or you have questions about their morals, their values, or your compatibility with your partner, I hope you check out my all-new online video masterclass “The Path to Peace”.

« Previous Post How To Feel More Confident in Your Relationship: 4 Tips [VIDEO] Next Post » “Man’s Search for Meaning” and Overcoming Retroactive Jealousy [VIDEO] 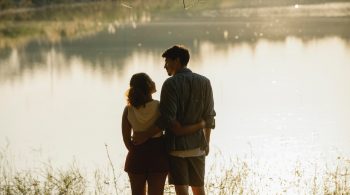