“Help! I’m stalking my wife’s past on social media…”

If I had a dollar from every guy who wrote to me, saying they were “stalking my wife’s past on Facebook, or Twitter, or Instagram, or…”

In many ways, there’s never been a better, or worse, time to be struggling with your wife’s past relationships/sexual history.

Unlike decades earlier, with the advent of the internet, the average RJ sufferer can find a wealth of useful information on the topic.

While it’s true that there is a lot of garbage concerning retroactive jealousy on the internet, there is also a growing amount of quality information available online. (And, of course, as the creator of this blog, guidebook, and course, I realize my own bias in saying so.)

Which is to suggest that, before the internet, the vast majority of RJ sufferers were forced to deal with their confusing condition in isolation, and thus failed to get the guidance they needed to overcome retroactive jealousy (or so I imagine).

However, the internet is also one of the worst things to ever happen to retroactive jealousy sufferers.

Tell me if this sounds familiar…

You see an unfamiliar friend request, post, picture, or message appear on your wife’s Facebook account. You click on the profile of this “new guy,” start going through their profile details, and two hours later you’re still sorting through old photos, scanning for traces of your wife’s past, and trying desperately to figure out how this person “fits” in your wife’s past life.

Did they ever sleep together? Is he flirting with her? How does this guy even know my wife? How does he fit into my wife’s past? What did they do together?? I NEED ANSWERS!!

I exaggerate, but you get the point.

Every month I get at least a couple of emails from RJ sufferers who can’t seem to stop looking for details about their wife’s past (or husband’s past, or girlfriend’s past, etc.) on Facebook, Instagram, or Twitter, or stalking their partner on social media to see if s/he is keeping in touch with their ex. 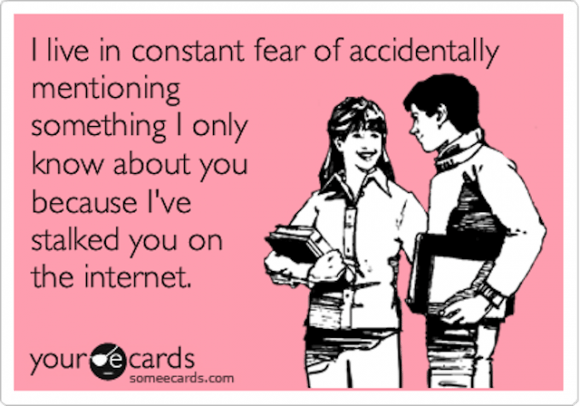 We all know that social media can be addictive, but what’s worse, it can also be extremely detrimental to the recovery of people dealing with retroactive jealousy.

It’s easy to lose hours, days, or even weeks to Facebook, sorting through old details like some second-rate detective, and trying to piece together your wife’s past relationship and/or sexual history with the available online “evidence.”

Many RJ sufferers write to me to ask questions like:

“How do I stop stalking my wife’s past on Facebook?”

“How do I stop myself from seeking out details about my wife’s past on Instagram?”

Even if you’re not stalking anyone on social media, if you deal with retroactive jealousy it’s useful to consider your online habits with care, and avoid negative patterns that can support, or even embolden your RJ, delaying your recovery. I’ve written briefly about this before, but with all of the emails I’ve been receiving lately, I thought it might be time to expand on my original thoughts on the matter.

SO: if you’re dealing with retroactive jealousy, and think there might be details of your wife’s past on social media, it would be a good idea to keep the following in mind next time you log onto your social media accounts:

1.) In general: the less time spent on social media, the better.

And don’t give me the excuse that you need to use social media as part of your work, or to keep an eye on your kids, or whatever. I’m sure even Mark Zuckerberg could stand to spend less time on Facebook.

Aside from being a serious time waster, with social media there is always the risk of seeing some picture, name, or post that can inspire some new “mental movie,” or some other type of retroactive jealousy flare-up.

As you (probably) know, it doesn’t take much to inspire more intrusive thoughts, depression, and curiosity as it relates to your wife’s past, so in the early stage of overcoming retroactive jealousy I think it’s always a good idea to steer clear of potential “triggers.” And there is almost certainly no bigger depository of potential “triggers” re: your wife’s past than something like Facebook.

If you find the temptation too great, there are a number of software tools you can use to limit your time on social media. You may want to check out Cold Turkey (free), Anti-Social (paid), or Rescue Time (paid). I’ve used Rescue Time in the past, and found it very helpful.

2.) Your wife has a right to keep in touch with whomever s/he wants, just like you.

Unlike in previous generations, there’s a very real chance that you’ll maintain some form of contact with old friends (and lovers) for the rest of your life, even as you change schools, jobs, cities, or even countries.

Which is to say: welcome to the 21st century. We’re living in an unprecedented new era of human interconnectedness, and I would estimate that the majority of social media users are going to maintain some kind of connection with their exes for the foreseeable future.

Because your partner is not you, and may have a completely different viewpoint than you when it comes to keeping in touch with their ex(es). The fact is most people–especially people in their 20s and 30s, who grew up with the internet–see no problem with keeping in touch with their ex on social media; for most men and women, it’s simply a non-issue. And you telegraph insecurity when you try to turn it a big deal.

Besides, there’s a very good chance that your wife maintains, at the most, no more than a passing interest in their ex’s life on social media; even more likely is that your partner is simply being polite by keeping them as a “friend” on Facebook. So try to relax on this issue as much as possible.

So, if you feel like your wife is crossing “lines” when it comes to keeping in touch with her ex, it might be worth having a conversation with them about their social media habits. But instead of complaining or being needy, state your feelings on the matter as cleanly as possible–be honest, be direct, and make it clear regarding what is OK with you, and what is not.

Of course, I can’t tell you what is “appropriate” behaviour for your partner online, and what isn’t; that’s up to you and your partner. All I can advise you to do is be honest with yourself and your partner about your values, and make every effort to communicate them to your partner in as clean, and non-judgmental a manner as possible.

Depending on the severity of your retroactive jealousy, it may be worth “blocking” your partner’s ex from your social media account.

This will (hopefully) ensure that you don’t encounter their name or picture randomly on your newsfeed, and thus, will help to prevent “triggers” relating to your wife’s past. (It will be extra satisfying after you overcome retroactive jealousy, and realize one day in the future that you completely forgot you ‘blocked’ them in the first place.)

Use the challenge of social media as an opportunity to grow stronger.

You’ve seen through the noise, made the determination that your wife’s past doesn’t conflict with your values. You’re moving forward.

Like any other challenge as it relates to RJ, you can use the presence of your partner’s ex on social media as motivation to grow stronger.

So, although you may choose to block your partner’s ex for a while (or–even better–abstain from social media entirely as you commit to defeating retroactive jealousy), keep in the back of your mind that, if you put in the work, one day in the not-too-distant future seeing them on social media really won’t get to you.

So take this opportunity to set a new goal for yourself: tell yourself that you’re going to overcome retroactive jealousy no matter what so that someday soon you won’t give a second thought to “stalking my wife’s past” on Facebook.

If you put in the necessary work, you’ll overcome retroactive jealousy much sooner and more easily than you probably realize right now, and before you know it you’ll be able to log into your social media accounts without a care in the world.